And finally the project I teased almost a month ago!

I have this space in my kitchen. 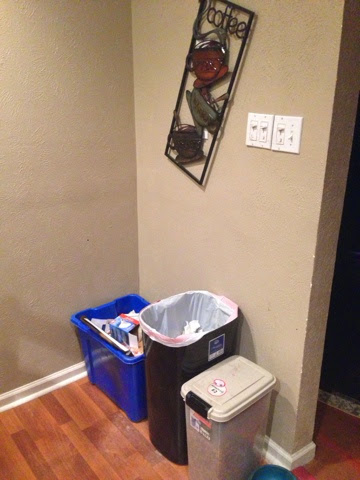 As you can see, it's almost wasted space, and the dog is able to knock over the trash can whenever she gets mad about something and spread it all over the house. (Another reason I pulled up the carpet back in November and put in the paper floors.  Check out that blog here.)

I've toyed with putting in a pantry for almost the entire time I've owned the house, but could never decide HOW to do that, on my ultra-cheap budget, and still have it look good.  Then I considered knocking down the top of the wall and opening it up into my living room, so that the two rooms had more connection.  One of my friends did that in her house, and it was SUCH a headache for her, that I decided to not try to take that on, myself.

At some point this spring, I decided to just put a shelf in, at bar height, to allow for more counter space and to better conceal the trash, recycling and dog food canisters.  When I started talking about it to my kids, D2 insisted that I put some real effort into making it look good, not just be functional.  She didn't mind the shabby chic of my back yard, but insisted that the inside of the house look good for her friends.  TEENS!

So, that slowed me down.  I had to figure out how I could build something, on almost no budget, and have it look like it was semi-professional.  I built the box out of that reclaimed plywood, and some old fence materials, but then it just sat in my shed for a month or so while I tried to figure out how to dress it....and how to mount it. 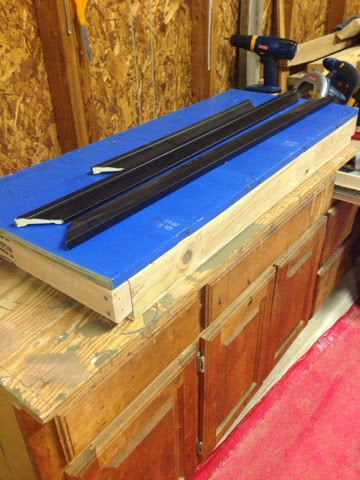 I had bought some shelf brackets at Dollar Tree, but when the kiddo insisted it look GOOD, I had to re-think the support.  I did some research on YouTube and saw that several people advised the kind of wall anchors that would go through the wood, into the sheetrock, and then pivot to provide stability.  So I went to Home Depot and bought a package of the sturdiest looking 3" wall anchors I could see.

When I was out in the shed, last week, looking for something else, I spotted some baseboards that had been left with the house/shed, and started looking at them.  They are actually the right height, and would affix to the box I built easily, and give it a more "finished" look. Then I realized that I would have to miter cut the ends to fit together.  I have never miter cut anything in my life and was seriously afraid to try. I remembered a friend telling me that my circular saw had little levers and knobs that would allow it to do angle cuts and so I pulled it out and started trying to figure out how to do that.  Knowing that I would do it wrong the first time, I left the baseboard sections about 6" longer than I actually needed them, and then cut.  Yep!  Did it wrong the first time.  Corrected the cut by flipping the board onto it's back, then re-drawing a straight line, then cutting again.

SUCCESS!  Repeat on the next section. Using wood glue and nails, I attached both pieces to the box....and noticed that my cutting skills hadn't been that precise when cutting the top out of the plywood.  There were little gaps between the baseboard and the plywood and I just stared at it and wondered what in the world I was going to do NOW?

As is my habit, I left it alone and gave it a day or two to let my brain try to resolve the issue while I focused on other tasks.

I was applying for a job at a local home improvement store and they asked about my knowledge of caulk...and I thought, "I can use caulk to fill in those gaps, then paint over it all, and no one will know!"  EUREKA!!

When I got to the caulk isle, I saw that right behind me was wood filler.  Well, if caulk will work, I bet wood filler will work BETTER, so I bought some of that, and saw the poly right next to it, and remembered that my poly at home was rubbish, so purchased a small can of that, too.

RABBIT TRAIL:
Feeling like I might actually be able to pull this off, I started thinking about what I could move to sit on that shelf, freeing up cabinet space or counter space.  As I was sitting in my kitchen, pondering, drinking my coffee, I thought, "Wouldn't it be nice to have my coffee stuff moved over there where I could spread it out and not have it be such a clutter that everyone sees the second they step into the kitchen?"

See, I'm a little bit of a coffee addict.  I have the Keurig, a regular drip coffee maker, and a french press, in case the electricity goes out.  Yes, I would boil water in the fire place in a kettle and use it to make coffee.  Yes, I'm THAT bad of an addict.

So, I'm dreaming about making it my own personal coffee bar, and realize there are no plugs on that wall.  HOWEVER, my dad and uncle are 3 streets over and both are relatively competent DIY electricians. :D  Oh, yes, I immediately began talking them into coming over and dropping me a plug right where I want it. HA! 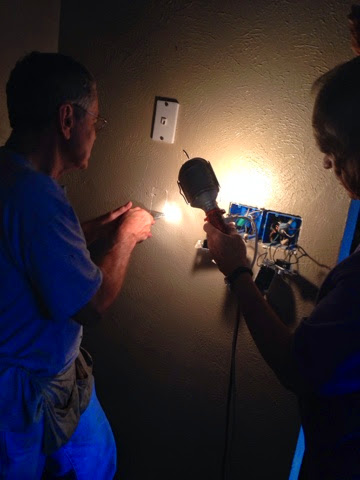 In the process, they also figured out why a particular switch wasn't working and fixed it.  Yeah!!

So, back to the wood filler.  I read the instructions carefully, and squeezed a bunch into the gaps, trying to use the putty knife to get it even.  It was so hot that the stuff was hardening quickly, and I wound up just using my fingers to get it where it needed to be.  Wait 2 hours, sand, add more to fill in the deep spaces, wait 2 hours, sand, repeat.  After it was built up to a satisfactory level, I started painting with...yep, the RED. Ha! 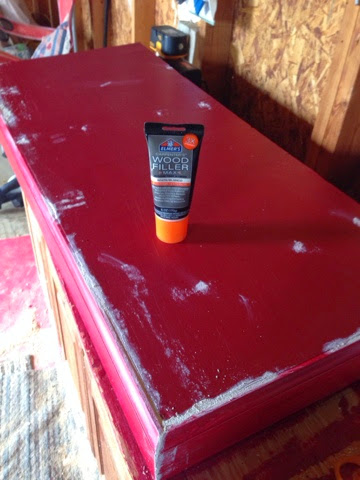 I REALLY wanted to stencil something on it, but my stencil skills are SERIOUSLY lacking.  I was almost resigned to installing it with no decoration, when I figured out that I could do a reverse stencil on it.  So, I used some peel and stick letters, some painter's tape, and an odd piece of flooring to keep a straight upper line and painted over it in black, the same color as the legs. 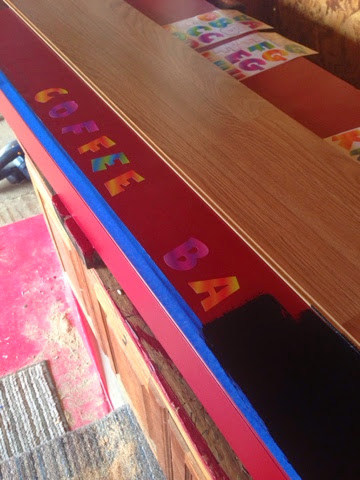 After waiting an hour or so, I did another coat of black, let dry, then removed the letters, tape and flooring.  I borrowed a small paintbrush from my artist of a daughter and went back over the edges with some touch-up paint to get the lettering as clean as possible. 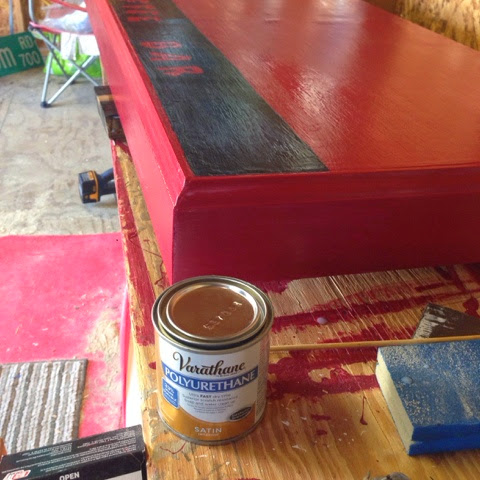 Let it all sit and dry for an hour or two, then applied the first coat of poly.  Wait 2 hours, reapply.

Here's the thing I'm learning in all of these projects. My push to get things DONE, isn't always the best way to do them.  I really should have allowed for more time to let it all sit and dry and harden before trying to install it.  Just because it's horribly hot outside, and the paint and poly is smooth and dry to the touch, doesn't mean its HARD and ready to move around.

Called Dad and Uncle to help me get it installed, and as I was trying to communicate with them the way I envisioned it being affixed to the wall, we managed to bump it a couple times, and there are now a few little nicks on it.  It's not huge stuff, but I'll always know its there if I don't go back and fix it. I let it sit for several days, after I saw that, and then moved in.  I was just given a sign from an old church coffee shop, and I mounted that on the wall to cover the old telephone jack. 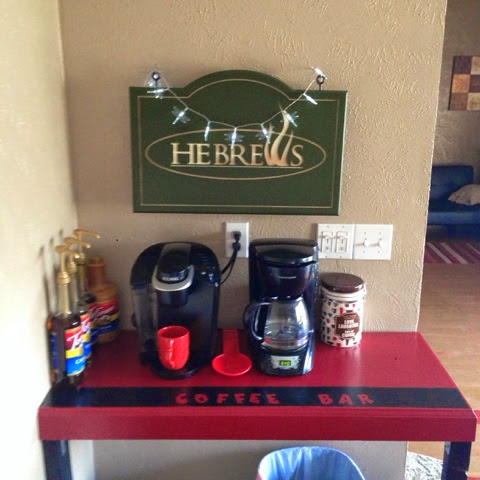 I'm going to go back and sand, touch up and re-poly the couple of spots that bother me, and realized that when I measured and built the box, I didn't allow for the extra 3/4" of the width of the baseboard, so that needs to be painted/hid.