Recently, I started following Wood Grain Girls on Instagram and saw that they were doing an Instagram Builder’s Challenge.  I signed up determined to actually build something “normal” for a change and to follow the plans exactly without throwing in a bunch of Make-Dos.

They sent out the plans, and it turned out to be the Shanty2Chic Farmhouse Table. I had been toying with the idea of rebuilding my kitchen table, anyway, as it was very unstable.

First lesson of these types of builds, “$50 in wood” means in their geographic region, and you should expect to double that if you have to buy screws, wood glue, stain, poly, etc.  Factor all that in when planning your budget, or you will be shocked.  Don’t get me wrong, building a nice wood table like this is still WAY cheaper than buying one from Pier 1, World Market or RH.  It just isn’t only $50.
First I went over to dad’s and used his table saw to cut down the 2x6s.  I was intending to do 5” boards, but….well, I’m still learning, so they turned out to be 4.75”.  Great, now I will HAVE to make-do things.  Speaking of make-do, what do you think of my out-feed table? 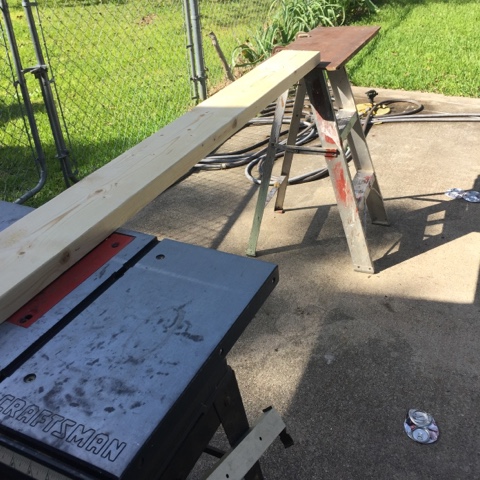 Then I took everything home and started cutting to length. I really tried to follow the plans, but after some measuring, realized that the length would be too long and the width too small, since I had made the cutting mistake.  I opted to add another 2x6 (2x4.75) to the width of the table top, and forego the breadboards across the end to save myself that 10 (9.5) inches.

The plans called for drilling pocket holes in all the boards, and then glue and screw it all together.  I really should have done a dry fit of the boards, first, to see which way they all fit together in the smoothest way without gapping.  But, I didn’t. So I started gluing and screwing and realized that a) I was on my patio and it wasn’t a smooth level surface and b) Some of the boards weren’t actually square so there were gaps in between them and the screws wouldn’t hold them tight.  BUMMER!!
I also realized that I hadn’t bought enough screws.

I wrestled with everything for about 30 min, and finally got it all screwed together, then realized that it was TOO HEAVY for me to carry back to my shed by myself! :o That was my first clue of how sturdy this table was going to be.  It is a HUGE difference from the flimsy one I have used for 15 years. 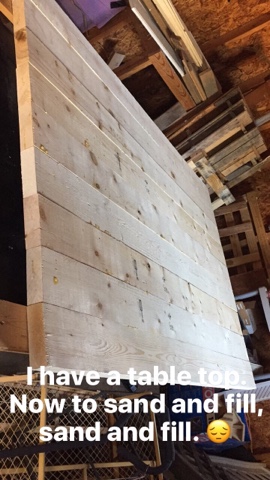 Once D2 helped me wrangle the top back into the shed, I started working on the legs.  The plans called for me to glue together two 2x6s for each leg. Except I got to cutting and made a mistake, so….

I happened to have a 4x4 that I was planning to use for something else, but, hey, it would save a bunch of gluing, so cut it down for the legs. I then did the measuring and cutting for the rest of the base, testing it all out by laying it out on top of the drying table top. 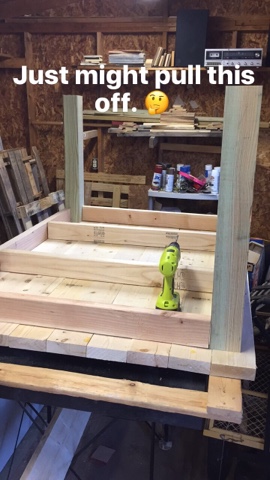 By that time, it was getting late, and I knew I was out of screws, so spent the rest of my day drilling all of the pocket holes in the base so that I could glue and screw those after doing a HD run the next day. 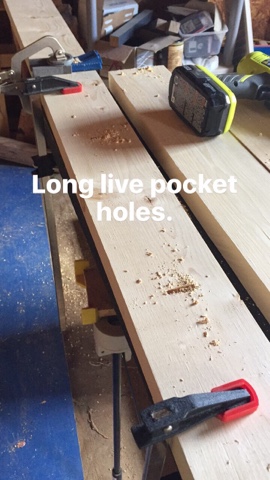 SO MANY POCKET HOLES!!

The next day, I came back to assemble the base and realized that I had measured the apron as all flush with the legs when I was cutting/drilling and the plans called for the aprons to be inset on the legs. Another mistake!!  But I persevered, glued and screwed everything else except for those and then went to work sanding the top.  Time for another HD run.  This time, I needed another 2x4, and some wood filler. YIKES!! 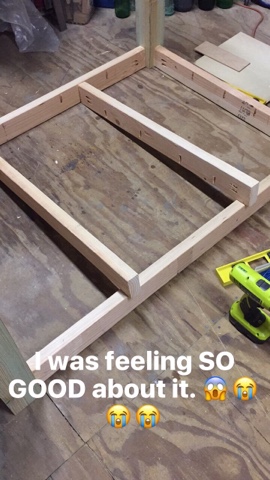 I did a test patch of the stain I had picked out on the wood and decided it was just too dark. I wanted a lighter color table top, but I had spent $20 on it, so I was going to use it! 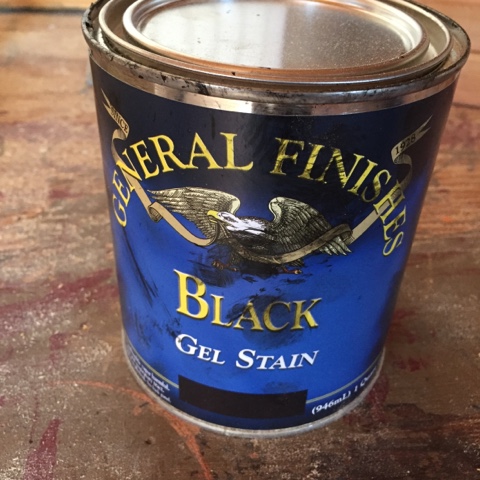 After the HD run, I finished putting the base together, and then I opted to use the black stain for just the base. I learned why people wear gloves when staining.  OH MY!  That stuff doesn’t come out. A week later and I still have it around my cuticles. 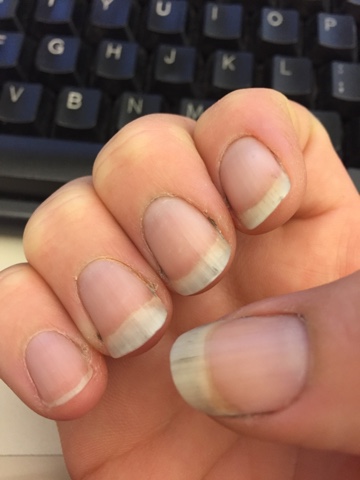 While waiting for the base to dry, I filled in the cracks in the top with wood filler, then called it a night. The next morning, I sanded down the top, added some more wood filler, where needed, then moved the base outside.  After putting on gloves (see I learn!), I went over the base with one coat of poly. In the Texas sun, it dried really quickly! 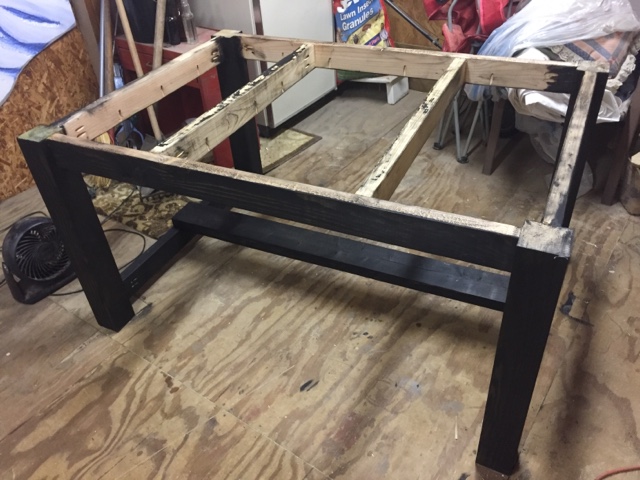 Gave the top one more thorough sanding to get the wood filler blended, then wiped it down with a wet towel and let that dry for a bit.  I was afraid to start staining the top.  What if I didn’t like the color?  What if I messed it all up?  GLAAAARRRGH!!!!!! 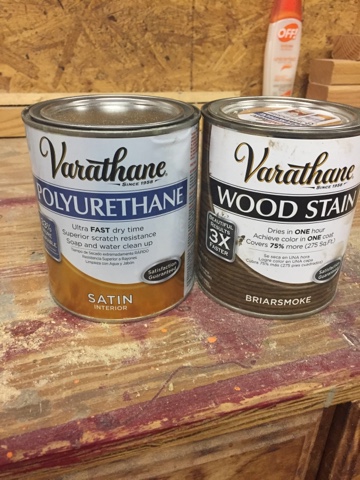 But, since time was wasting and I was on a deadline, I just went for it.  Only put on one coat of stain, wiping it off almost immediately after applying it, working in sections.  I’m so very glad that I actually did like the color.  Let that dry overnight, then sanded it in spots to give it that distressed look, wiped it all down again, then applied a coat of poly. 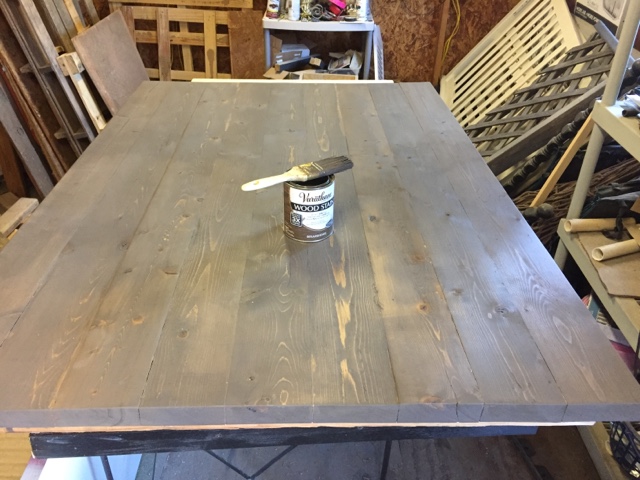 In all, I put two coats of poly on the base and 3 coats on the top.  After the 2nd coat on the top, I let it sit for 24-hours, then hand sanded with 220 grit sandpaper to make sure there were no drip spots and put on one more coat of poly.

After that dried, we moved the base into the house, then set the top on it, measure to get it all square and centered on the base, and screw everything in.  WHAT A RELIEF!!!! 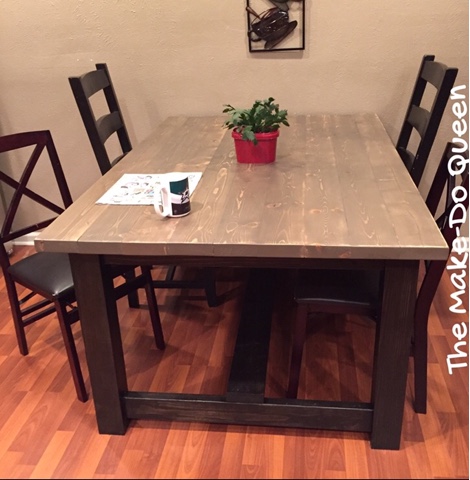 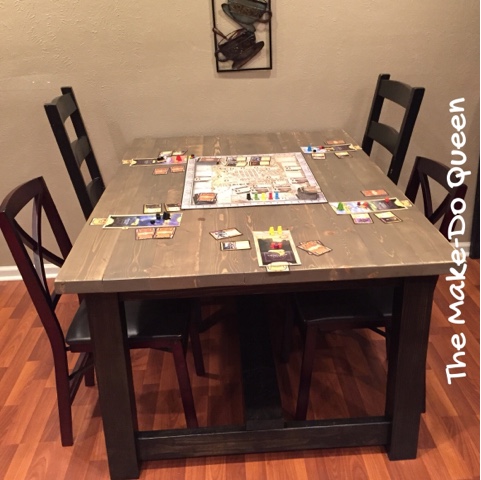 That said, go check out some of the other contest entries, and see the winners, over on the www.woodgraingirls.com site. There are some really amazing and creative people out there! 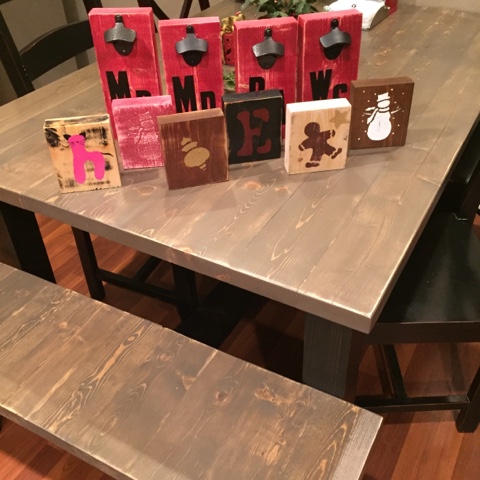