Enhancing my She Cave

So I have this shed in my backyard.  It’s WONDERFUL!  It’s big and has real walls, a big door, windows, electricity….it’s my workspace and I love it.  Except for July and August when it’s 100+ degrees here, in Texas, and the lack of air circulation in the shed makes for very sweaty projects.  I honestly think I lose about 5 pounds each weekend I’m out there in the heat!

At any rate, I saw this video on YouTube done by the wonderful April Wilkerson, and thought, EURKA!  I have a window AC unit. I should totally put that in out in the shed to see if I can just cool things off enough that I don’t worry about passing out when I get so focused I forget to keep slamming the water.

After much thought, I opted for a spot next to my workbench, thinking that the closer it is to me, the faster it will cool me off.  Makes sense, right?  Here’s the lovely wall that a kid started helping me paint. 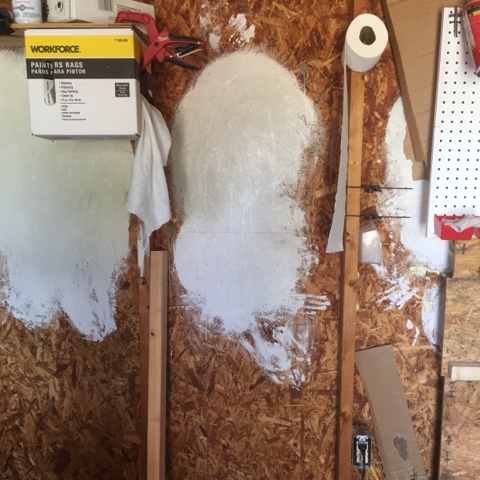 If you look at the picture for very long, you’ll have some foreshadowing on what the biggest issue with this whole project turned out to be.  Any guesses?

After measuring the size of the unit, I measured and cut the 2x4 studs to build a support structure under the unit, along with a header, of sorts, to go over the unit. That’s when it hit me.  There was an electric wire in the middle of the studs and to add more in, I would need to disconnect the wires from the plug, pull the wires out, run them through the new 2x4s, and then re-attach. GAAAAH!!!!!! So. I drilled holes in the new studs through which to thread the electric wires that run to the plug nearest the unit. 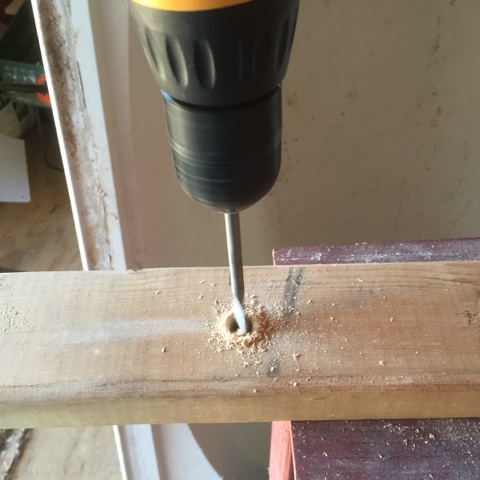 Then I turned the power off to the shed, pulled the electric wires out of the plug and backed them through the existing 2x4, threaded the new ones in, used my Ryobi Brad Nailer to attach the studs to the other studs, along with some other screws just for good measure, and then reattached the wires to the plug.  WHEW!  Trying to manipulate that electrical conduit was WORK and without power, I didn’t have my normal fans running, and it was July in Texas and I was so afraid that I had sweat all over the wires and would short out the whole thing!  YIKES! I was worried!  I can’t tell you how relieved I was to flip the breaker back on and have the shed not explode! 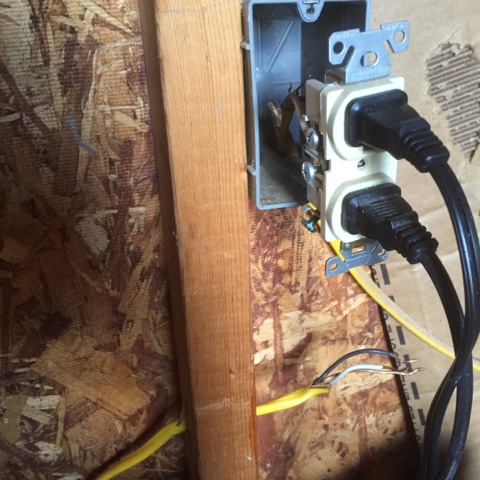 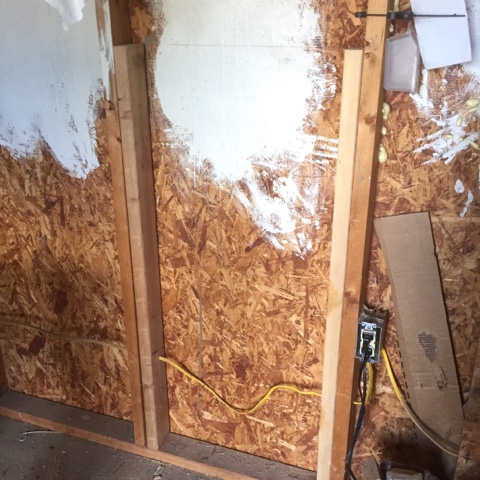 Next, I drilled pilot holes in the wall in what I was planning to call the corners of the opening.  After trying a couple of times to get the circular saw to cut out the opening, I gave up and went to borrow dad’s jigsaw, again.  I REALLY should invest in my own jigsaw! 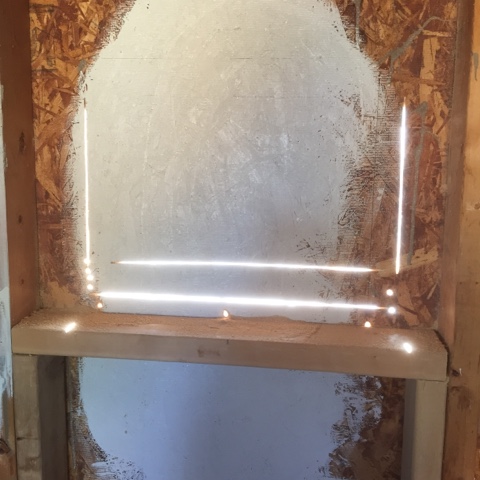 The jigsaw was the right tool and I quickly had the opening. 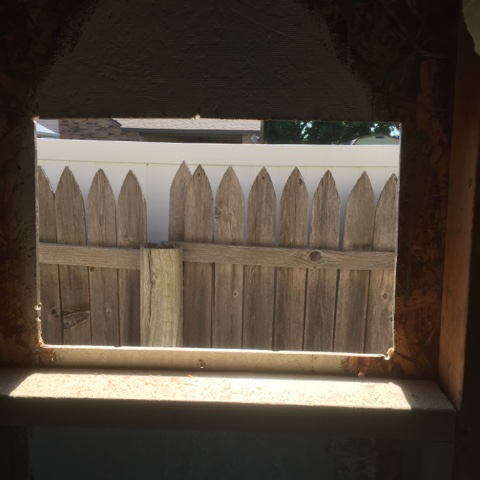 After checking the sizing multiple times, I trimmed more area off the face, then built a header of sorts to frame out the rest of the opening.  Then wrapped the whole opening with the pink foam insulation stuff, and slid the unit into the wall. 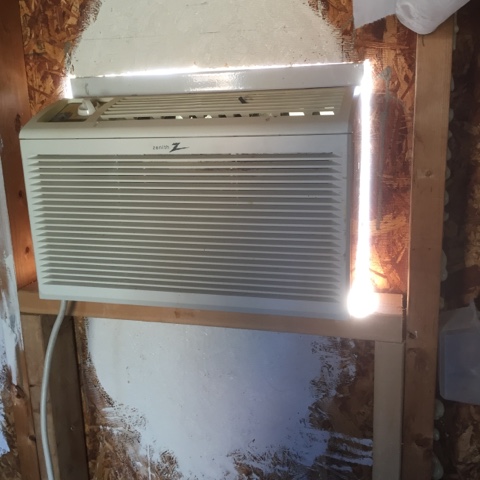 After I was sure it was snug, I emptied a can of spray foam insulation all around the edges to try to help keep out air/water, and then put more particle board over the whole wall area to help with the finish out. 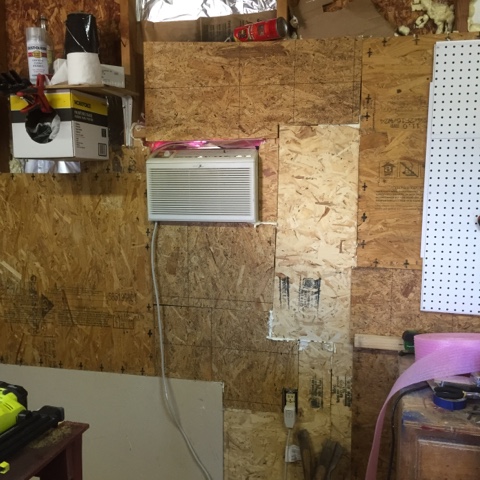 Once I got it in, I realized something.  The unit blows air UP….not OUT…..thus the totally ghetto plastic trying to get the air to go OUT into the shed.  What a bummer!  At any rate, it’s done and I think once I get the rest of the shed insulated and walled off, the unit will have a much higher likelihood of success. 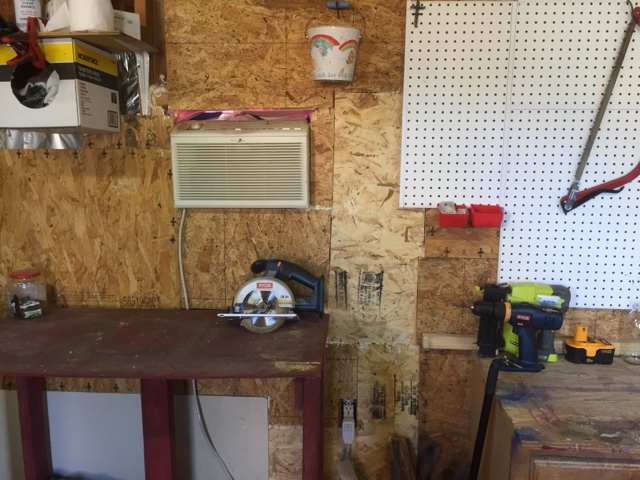 Total Cost: $18 for spray foam insulation, and the pink stuff from Home Depot

Total Time: 8 hours, mostly because I kept having to stop and go get another tool/item.

Now go make something of your own!

**NOTE: Looking at these pictures has promoted me to go out a faceplate on that plug. MUCH better!

Posted by The Make-Do Queen at 8:26 AM No comments: