Oh, yeah, more ideas for glass bottles.  I keep trying to come up with new stuff, not just copy the things I've seen on Pinterest.  The thing is, that's HARD to do!  Y'all are all so creative, and have such beautiful photos, that while I am proud of my work, I'm never fully convinced anyone else would like it.

That's why I maintain that if you're going to do crafts, do it because you like it.  Do things you like to do.  Try things you want to try.  Trying to copy other's work is what makes me the Make-Do Queen, because I always wind up substituting stuff and never using the exact same materials.  lol

I have three different results.  I started with 4 bottles, but one has gone back on the shelf for a re-think because it just didn't turn out well at all.  I'll come up with a use for it eventually, but for now, I'm calling it a dud.

I had a nice vibrant blue that I started with, then drizzled white paint into the bottle, as well, and let it swirl.  I REALLY love the colors and marbled look of it! 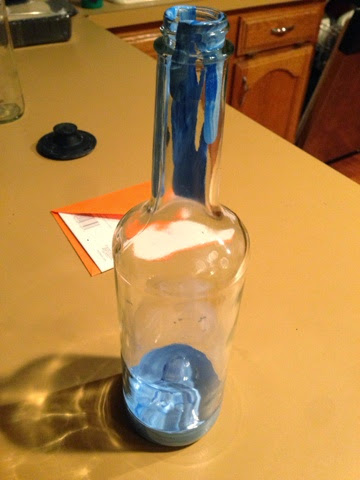 Over the course of a couple days, I would lay the bottle flat and let the paint run to a new side, then add in a little more, if I felt it was needed, until the bottle was fully coated.  Then, turn it upside down into an old coffee can or whip cream container (something of which I have gobs) and let drain/dry for another day or two.  The weather warmed up and I was able to set them outside in the sun, which helped. 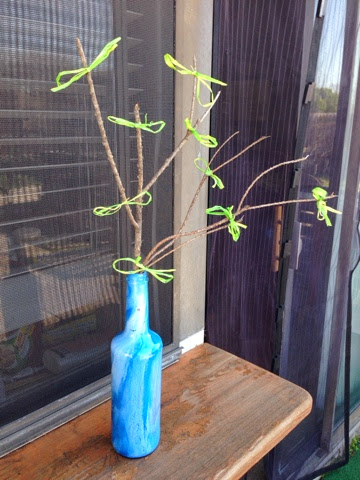 To finish, I just grabbed twigs out of my front yard (I have a HUGE Cypress tree) and tied raffia ribbon to give it a "spring" look.

For this one, I printed a globe-image off my computer, then blew it up to a good size, then pasted it onto the back of my trusty paper tape.  Using a cutting board and an box cutter, I cut the tape to create a stencil.  If you have a Circut or other fancy gadget that makes these sorts of things for you, I'M SO JEALOUS!! 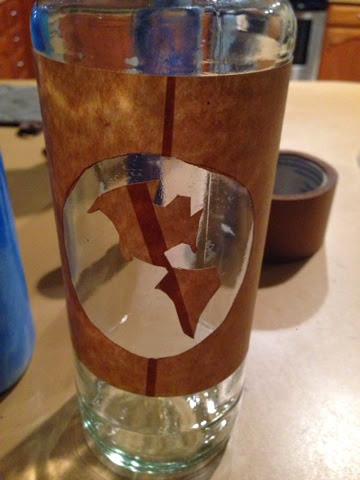 This time, I left the Etching cream on for almost 10 minutes. 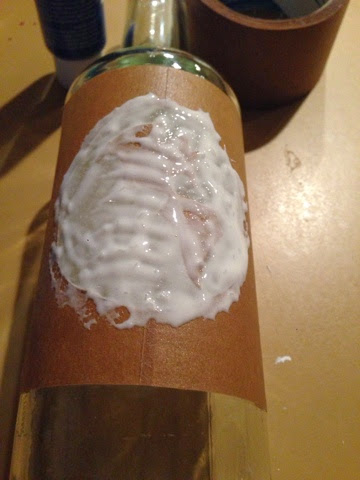 My Dollar Tree purchase of the hydrating beads. I only used about half of the beads that came in the package, and kept the expanding "vase" for use some other time.  Might make a cute gift bag. 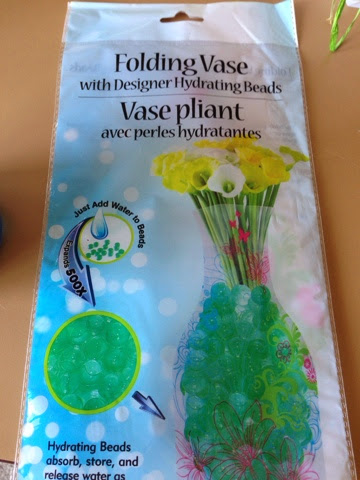 Followed the suggested instructions on letting the beads hydrate before placing anything in the bottle. 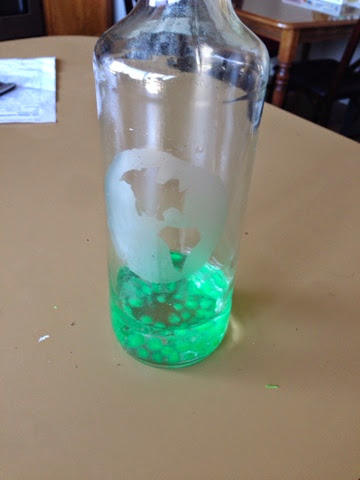 Then added garden soil. I had some that I purchased from Dollar Tree a couple months ago when I was impatient for spring, and combined that with some Miracle Grow potting soil to give a good mixture. 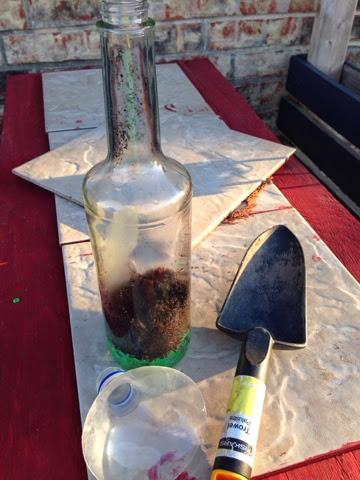 I have an ivy that I took cuttings from, and used. Somehow, I neglected to take a solo "after" picture.  So scroll down to see the final result.  I actually like it a lot....but I really love plants and planting.

And finally, I revisited my initial post of a solar powered lamp, but stenciled and painted for a more earthy look. Somehow, I neglected to take enough "before" pictures of this one, so I'll have to explain it a little more thoroughly.

Basically, I dripped blue paint down only one side of the bottle, careful to keep it from spreading by letting it mostly dry on that same side for several days.  Then I repeated with the green.  After letting it drain and dry, I stenciled it with the same globe stencil used above. Then, just to be safe, I sprayed multiple layers of clear sealer.  I know that probably completely ruins the whole idea of "earth friendly", but I really didn't want the stencil to wear off over time.  Its a completely optional step, and I should warn you that if you DO use the sealer, it will ruin any etching you've done with the etching cream, so...be informed.

When Dollar Tree was carrying the little solar lamps, I had purchased a bunch for project use, so took one a part, and placed the solar part and lamp shade onto the painted and stenciled bottle.  If you want to, you could easily glue it down with an epoxy or super-glue type adhesive.  I just sat it on top since there is little chance it will get knocked over.  The light is a really cool effect at night.  I wish I had the right kind of camera to do it justice. 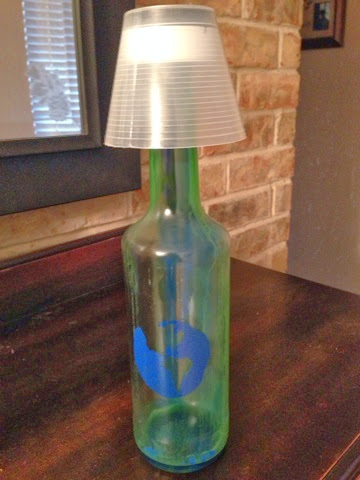 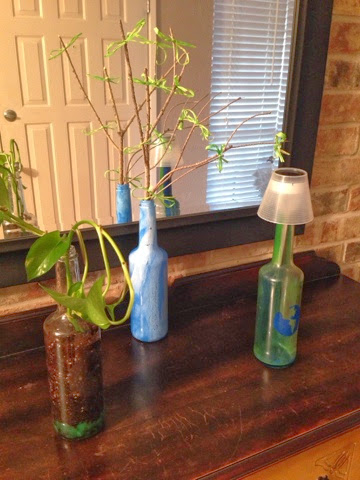 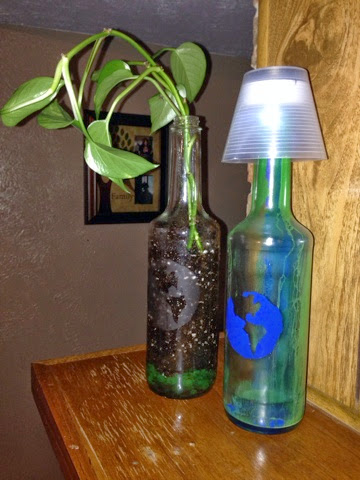 Total cost: Dollar Tree beads, lamp, raffia ribbon and dirt - $4.00 (I already had the other materials.)
Total time: I would work on them for 30 min every other day or so over the course of several weeks, so....maybe, with drying time, it could all be done in 5 days.